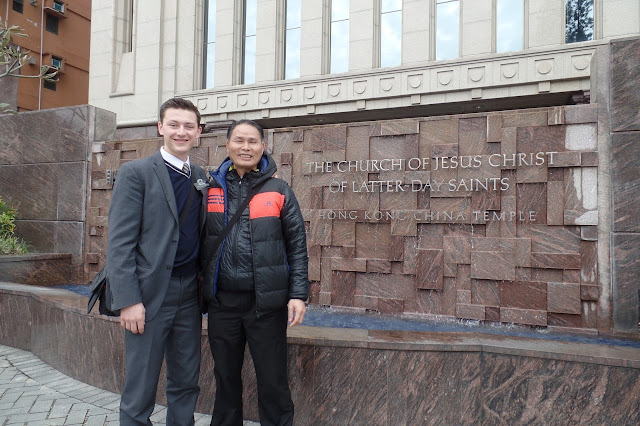 Where to start, it has been a good week! I am still just loving Cheung Sha Wan! It has been cold however! It hasn't been this cold in Hong Kong for such a long time, most people can't remember! It snowed in the New Territory's and I swear I saw a little snow fly Sunday morning from our 13th story window. Record breaking. FREEZING! It's been an interesting week.  I came in on a high with really high hopes for this week, and they all just crashed. It was interesting though, this whole week, having just watched 17 Miracles during soap cycling as a District, my mind was drawn to the scene where the main character, Levi Savage, is pulling a cart all by himself. It was towards the end of the journey, and many had died.  He himself was in a poor circumstance, and you would think at that time he wouldn't be able to do it. Truthfully, a physical man probably couldn't. However, as the scene continued, it turns to Brother Savage pulling his cart, but behind him are those that have passed on before him. Those he worked so hard and cared so much for. That scene always has me emotional. I have a lot of respect for the pioneers and love learning about them as they are family, and that they did so much. So coming into this week I was caught pondering on my own self, and who was pulling my cart, because I surely need it. In today's times, there isn't a need to pull an actual cart, without food, and in perilous circumstances. True, but we are pulling a load of missionary work (or other work), or cares for self and family, and a desire to become better. The world presents us, as sad as it is to say, with perilous circumstances. We are starved in every fashion. The world is drawing us away from the water of life, and the things that matter most to our eternal welfare. As I have thought about this, I have thought about those who are helping me persevere, and to remain stalwart in this battle. My grandparents (especially my Nana Rosy, and Grandma's Donna, Thea, and Margaret are all sending me a little bit of their spunk), my future children and friends I have known. This knowledge kept me boosted this week as we endured multiple lessons that we were stood up for. So many things just didn't go as we wanted or that we had pleaded to the Lord for. However, we saw miracles, and we remained happy the entire week. I didn't understand all this on Sunday night when the week had culminated. Looking back, I saw their hand, their steps beside mine. It has been a learning week, that is for sure, but as we endure it well, we are blessed and lessons are learned. What a good week.

Just got out of the temple! So much fun, I absolutely loved it! As well, after we had lunch with CSO! He's got some more grey hair but just as good as when I left. He's been doing his family history way back in Mainland which is cool. Being a District leader is fun.  We get to call around every Sunday and see how everyone is. We have a huge district so that makes a lot of time for poor Elder Da to do calls. Good thing he is such a hard worker. I have been blessed with the best of companions. Starting with Elder G in the MTC, to Elder G, to Elder J, to Elder Da. All are lifetime friends. Everyone is well! Met a great LA (less active) that hasn't been contacted in ages and had lunch! He's 24 years old, and his name is Kobe. haha and he's tall, plus he is ready to come back. Very excited, PLUS almost forgot about A-k, just got off his mission in Dallas, Texas!!! I shed tears when he walked into the church with a big belt buckle and cowboy boots. Ah we are real good friends already. As well just a fun note: Elder Da and I are the laughing stock of the zone. Thanks to the Sisters and Elder Da. It's been so cold and Elder Da has been freezing to death so we bought some long johns to wear under our pants.   Except the only color they had in my larger-than-asian-average size was pink! So now everyone thinks I wear pink tights. Go figure. It's fun. Love it.
Have I told you how much I love this work lately? Well, I do.

Love Elder Sargent
-Oh did i mention there is no heating,... anywhere? 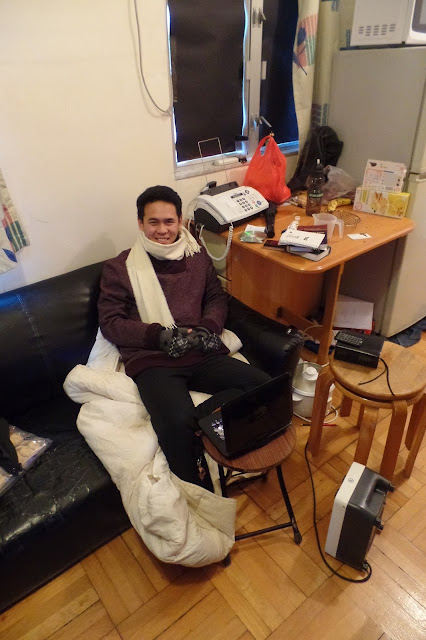 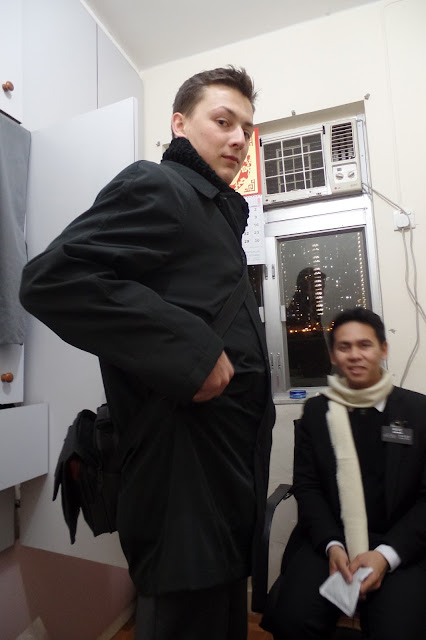 Posted by Unknown at 2:27 PM No comments:


Well it has been really 'down to business' this week. Loving it here! Cheung Sha Wan is just on the upward trend! We picked up a few more baptismal dates and have some people praying about more. H (18), K (12), and C Y H (40) need the prayers right now. They have dates in less than a month and should be ready but need to keep working! As well for the miracle! J, who we met two Saturdays ago during our member find, came to church last Sunday, the day after, and then we met again and scheduled a baptismal date! He is amazing. Has physical limitations and is bound to a wheelchair, but wants to learn more. He couldn't come yesterday due to the rain, but we are looking forward to continuing to teach him. 20 years old and lengjai. The area is thriving under Elder Da's great work ethic and Phillipino cooking. Last Sunday was also very cool as it was the Sunday during the month where the whole International area gets together and has their meeting in Kowloon, then has the opportunity to go to the temple during shifts after. So many faithful Phillipino sisters. I as well did not realize how many senior couples were here until yesterday. So many! They work in Wan Chai and preside over some of the English branches. Elder Da and I are loving the work. Couldn't be better. Love everyone out there. Keep working hard. As I talk with other missionaries and see this work, many things have become evident, but one thing stands out. He is coming, and He is coming fast. Let us prepare! I love you all!
Posted by Unknown at 3:54 PM No comments:

Elder Sargent dropping a line in here. Wow what a week. Feel like I have been through a washer this week! Cheung Sha Wan is amazing! I am loving it. The work here right now is on fire. We picked up some new people this week, and had an amazing time at church. I have loved serving with Elder Dap and Elder McS this past week. Elder McS is amazing. It has been an absolute blast being with someone who really knows Chinese again and can help me learn. However, it was quite sad to drop him off today. He brought me into this world, and as I told him, I am taking you out. It has been a pleasure serving with one of the greats. He is amazing. Elder Dap is also amazing. I don't know if I mentioned last time, but he is a ranked roper from the Philippines. Look out folks, I am bringing him home to show us a thing or two about the ranching life. Hard worker. He is awesome. The people here are amazing. I absolutely love them. The ward is amazing. We actually are one of two wards that meet in Kowloon next to the temple. Our ward is about 100 people, the size of both my last two wards put together. The other ward is the Assistants ward, which means I see Elder D ALL the time! There are some really special people here in the ward that I can't wait to explain later. The first to explain is probably Bro. L. The man is a modern day Job. I would go into details, but it's irrelevant. The fact is he has had to have his legs cut off, and is wheelchair bound. So powerful. Such an example. We are already the best of friends. Oh and his favorite pastime is " I like to Bible Bash with J Dubs" haha imagine that with a super thick Chinese accent. I now live in Kwai Chung, a lot smaller apartment than Tung Chung with Elder S (our Zone Leader) from Southern Utah and Elder F from Washington! Also from my group. Miracles are continuing to rain down upon us and I don't understand why. I love this work and will continue on! Those that read know this, the work is progressing. The work cannot be stopped and it is amazing. If you are not a part I urge to join. Find all the ways you can to serve, to share. Be to church every Sunday with a heart willing to learn. Prepare ourselves for every opportunity to share this message that changes lives. I wish to tell the Lord on that great day of reckoning, I did my best. I gave it all and I represented you.

Love you all! Be a part of the work and not just around it!!

--
Love,
Elder Sargent
Posted by Unknown at 8:38 PM No comments: 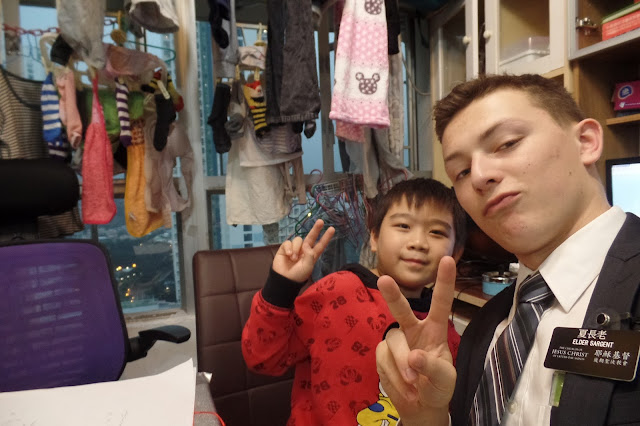 Happy New Year! Hope all is well with everyone. I am so excited to move to Cheung Sha Wan! Yes, kind of a random mid-transfer move, but that is it. I am going to Cheung Sha Wan to serve as District Leader and will be serving with Elder McS (old Assistant to the President and current Zone Leader) for his last two weeks and Elder Da (my little cowboy from the Philipines). Elder J is staying here as the District Leader and will have a native companion who is waiting for his visa. As well, Elder D is moving to Kowloon to be the new Assistant! I will be honest, I was quite disappointed to be leaving Tung Chung. I have grown to love the members there and our investigators and less-actives quite a lot. However, I am ready to move on and make the next area even better than Tung Chung! I am also humbled, yet excited to serve as a District Leader. Working with Elder McS for a couple weeks and Elder Da is going to be so much fun. I can't wait to get right into it and start learning. They have so much to teach me. It has been a great pleasure to serve in Tung Chung and I have been beyond grateful for the opportunity to do so. I have learned and grown so much in my time here. Elder J has been a great Senior Companion and friend. I have loved every minute. I don't have much time today, but I wish all the best. Love you all! Thanks for all the prayers and encouragement! Love you!
Elder Sargent
Posted by Unknown at 3:09 PM No comments:

For those of you that are trying to reach me here are my addresses. I love to hear about everyone so don't be afraid to email :)Email address:nathan.sargent@myldsmail.netField address:Elder Nathan Colton SargentChina Hong Kong Mission18 Dorset CrescentKowloon Tong, KowloonHong Kong